In early 2021 I determined that Deep Brain Stimulation (DBS) was the best option for me in the continuous battle with PD (Parkinson’s Disease).  I was diagnosed in 2011 at the age of 44 and by 2021 my main symptom, tremor, was getting to be unmanageable despite the gradual upping in Levodopa meds. 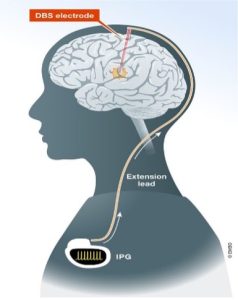 For those of you who are not familiar with DBS it consists of a medical device called an impulse generator implanted in your chest which can send different signals via a lead to 2 arrays of electrodes which are inserted in a specific region of your left and right side of your brain.  These signals can then be tweaked by the doctors and/or the patient (ampage, frequency etc.) in order to reduce some of the symptoms of PD, especially tremor, and reduce the patient’s Levodopa intake. It does not however affect the progression of the disease.

I decided that I would prefer to go with the newly established Irish based DBS group, operating out of the Mater and Beaumont hospitals. My main reasoning for choosing Ireland over the more traditional UK route was ease of access/safety of travel, particularly if anything was to go amiss, and especially true during the Covid crisis. I informed my Neurologist in St. Vincent’s hospital and they sent a referral on to the Mater team.

The months before the operation.

A couple of months after the referral I had my first review with the Mater based DBS team.   This allowed them to carry out a preliminary assessment of my suitability whilst also discussing options as well as probable outcomes.   The process going forward was 3-fold:

My pre-assessments happened over a 6-week period in the Dublin Neurological Institute / Mater hospital.  They all went fine. The cognitive test, while I happened to be predominantly “off”, was the most onerous for me.  The examination of the “best you can be”, which involved having to go through a fair amount of a morning with no Levodopa drugs, was also challenging.

It was made obvious to me from the initial consultation that the 2nd element of the overall process, i.e. the operation which was just commencing in Beaumont in Ireland (Nov 2021), was going to be a “bottleneck” that might add almost a year to the process versus if I had the operation itself under private health insurance in London.

When the multi-disciplinary medical team got together post the pre-assessments and agreed that I was a suitable candidate for DBS, I was put in touch with my surgeon in London and we had a detailed and lengthy conversation.  I had done a lot of research on all aspects beforehand.

Points discussed included the usual potential risks of the surgery and the outcomes.  It also determined which device I was to have (Boston Scientific – Vercise Genus, rechargeable) and that I had a preference for implanting the sub-cutaneous pulse generator in my right chest versus the more usual left chest.  This was for various reasons, chief among them, was “future-proofing “in as much as I could, in that in the future impulse generators may have feedback control and the heartbeat (if implanted on the left side) can sometimes interfere with the feedback signal.  The rechargeable unit that I was having installed had a warranty of 15 years before needing replacement, so probably a long-term investment!

The date of the operation was set for the 13th January 2022 which gave me 5 weeks to organise the trip plus get approval of cover from my medical insurer.  The latter took a long time to process and only came through, after a lot of communications, on the Friday, 2 days before we were due to travel to the UK. Other items that occupied the interim time included:

Covid travel restrictions were at their height in early January 2022 and my wife, Joan, and I were tantamount to paranoid that we’d catch Covid just before our UK trip.  So more or less total isolation was imposed after Christmas.  We also decided to travel by car/ferry rather than fly.   The medical team recommended that I shouldn’t fly for 1 week after the operation whereas I could be driven home 3 days after the operation plus it seemed like a better way to avoid potential Covid exposure.

We travelled over on a Sunday for an operation on the following Thursday.  The early arrival was because there was a requirement for a detailed MRI at least 2 days before the operation and Covid meant we had to be in the UK 2 days before the MRI.  The financial cost for the trip to the UK for the two of us was basically the travel costs and the hotel & food costs for a week, somewhere around €2,000.  It also meant Joan taking a week off work.

I went into hospital at 7am on the Thursday and “went under the knife” around 1pm.  It was a four-hour operation in total and I was under full anaesthetic.  I woke up later in the evening post recovery feeling surprisingly well, almost chirpy.

The facility was first class including a dedicated nurse in my first 24 hours post op in the ICU, and 3 days in a private room.  The option of 8 main courses on the dinner menu will give you an idea of how high a standard the food was there. 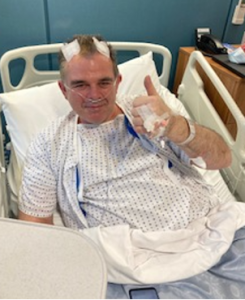 I had to wear surgical socks during my time in the hospital, and they also gave me an anti-coagulant injection prior to my departure.  This was all to minimise the potential for a clot to form.  There also was a urinary catheter, but enough said about that!  I had several stitches in 2 frontal spots on my head (just behind the hair line), some more at the back of my right ear and some at the chest incision.   The only pain I really had was at my neck/shoulder junction where the lead had obviously been implanted. I don’t think that there was any placebo effect of the DBS (some patients experience a reduction in symptoms even before the DBS is turned on).

The surgeon visited me on the second day post-op and informed me that one probe was in perfect position and the second was about 1 mm from the perfect position, a good result.  He left a bag with all the accessories needed for the future working and upkeep of my DBS device.  I resisted the urge to read the two large instruction manuals on the device.

A 4-week period is set aside to let the brain heal post the operation so that when they activate the DBS they are dealing with your newly configured brain.   I felt frustrated during that period as I couldn’t wait for the eradication of my tremor.   I’d had a year of waiting for the DBS, I was counting the days to activation of my DBS.

I got my stitches out after 10 days at my GP.  Then finally the day of turning on the DBS arrived. I arrived at the Mater hospital accompanied by Joan at 9am in an “off” condition, for 2½ hours of assessment by: a neurologist; a PD nurse, a speech specialist and a student doctor.  It was tough enough going and I was glad that I had brought a fresh t-shirt to change into afterwards.

The way that the medical team assess how the DBS will work best for you is: 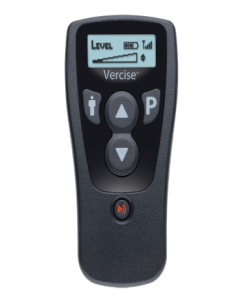 I was then sent home with the DBS set at a relatively low ampage for the best emitter on both sides of my body (0.5mA in my case).  I was to increase this by 0.3mA every 4 days.   This was achieved by using a remote control which allowed me to change the ampage to either side of my brain.  The remote also indicated the strength of my battery which is charged by induction every week (involves sitting still for 30mins to 2hrs depending on the ampage being used.  This was also to be accompanied by a gradual reduction in Levodopa meds, especially if bothersome dyskinesia was to arise.  So, over the next 3 weeks until my next scheduled appointment I upped my ampage to 2.0mA and reduced my meds by 50%.  My tremor had reduced significantly and with it some of the accompanying slowness of movement and general tiredness.

At the next 1-hour appointment with my neurologist (at 11 am with no meds taken) we determined that I needed to go a little higher with my right side (where the tremor began 10 years ago!) and the frequency of the signal was increased on my right side as this seemed to have a beneficial effect.

Since DBS was initiated, the positives are:

The (relatively) small negatives are:

I have another post-op assessment appointment in mid-April and then a 6 month “turn it off “ session in July.   I’ll keep you posted.